Meet Our Guests Part I 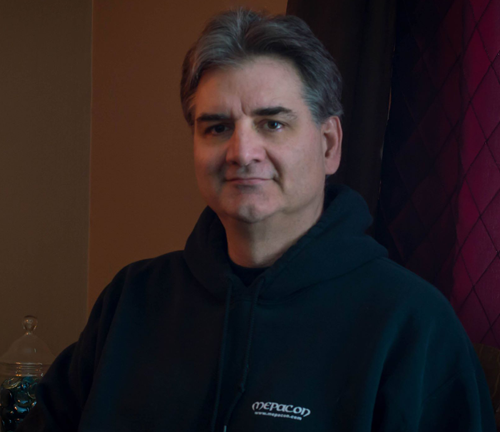 Dan Hundycz, head of DPH games, will be joining us once again for our Spring 2018 convention. He’ll be running a booth in the open games room on all three days. He’ll have plenty of games for you to demo. So we encourage you to stop by! We asked Dan some questions about his role in the game industry and specifically about his time at MEPACON.

Tell us a little about yourself. What is it you do in the gaming industry and how’d you get there?

I grew up north of Syracuse playing Avalon Hill military games. I thought they were amazing. Finding something deeper than Monopoly was instantly attractive to me. In college, there was the D&D stuff, but we also ran into Diplomacy, Cosmic Encounters (I still have my original copy), and Talisman. I had the right kind of friends. In the early eighties, I bought my first computer and programmed a baseball game, adventure game, and space game. I was a counselor and in our school I helped create a number of simulations (crime scenes & space), ran an after-school gaming club, coached our academic challenge team among other things. So, the short answer is that I was always aware of the utility and enjoyment of games.

Currently, I run DPH Games Inc. We have been around for a little over 5 years. We’re small, so I wear a lot of hats. Designing the games is one of the easier parts!

I’ve heard you have some exciting news. Care to share with us?

Well, there are a couple of things going on. Last year we tested The Gate of R’lyeh at MEPACON. At Origins a larger game company took interest in it. After a number of discussions with the owner, they didn’t think they could put it into their lineup for another 3 years. They still might, but they didn’t think there would be any harm in me publishing it now (they could always re-release it later). So, that will be up on Kickstarter in the coming months.

They also would like to build a Sci-fi game that is based on the mechanics of Affliction: Salem 1692. It looks like there will be a relationship for some time to come.

At the same time, we were commissioned to create a camping game. This will mainly be sold to campgrounds and the company making it will begin with 10,000 units. Our logo will be on the box, so, that will get our name in front of a large number of people.

What kind of games do you publish? Tell us about some of them.

I can safely say that we don’t lock ourselves into one style. Cache Me If You Can! is a gateway game. Psychological Warfare is a more traditional turn-based affair. CATS is secret selection simultaneous reveal. Affliction: Salem 1692 is worker placement, engine building, engine disruption and is highly interactive. The Gate of R’lyeh is a deduction game. Yokai Hunters (unreleased) is a puzzle style game and Legacy at Sea (unreleased) is just hard to describe.

Which game are you most proud of publishing and why?

I would have to say Affliction: Salem 1692. First of all, it has the most sophisticated strategy of any of our games and yet it may be one of our easiest to teach. Secondly, based on the feedback we have received, we got the history right. In fact, the Salem Witch Museum told us that it is the best selling product they have ever had at that price point.

Why do you come to MEPACON? What’s your favorite part of the convention?

The people are the highlight for me. The laid-back and accessible tone is also nice. Those people that run Artemis aren’t bad either!

What do you plan to run at MEPACON?

We will likely set up sessions for everything that we have published or most of the ones that haven’t been released yet. Clearly, The Gate of R’lyeh because it will be on Kickstarter, possibly, during MEPACON

Where can people buy your games?

Our games are sold internationally through distributors and wholesalers. So, any number of game stores may have them. Additionally, there are a few online vendors and of course, you can get them directly from us at DPHGames.com